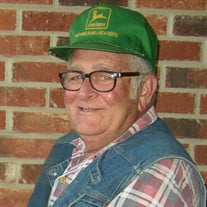 Amory – Cecil Dean Wilson, 86, met his Savior face to face on February 2, 2021. Born on December 27, 1934, in Monroe County, MS, he was the son of the late Min “Early” Wilson and Maerene Moreland Wilson Bearden. Cecil grew up in Monroe County and attended Amory schools. He met the love of his life, Mabel “Mae” Childers and they were married on April 15, 1955. He served briefly in the United States Army National Guard where he was an E-5. Cecil initially started working at Tony’s Bakery and then he began his career at the Frisco Railroad, and later Burlington Northern Railroad. He worked for over 40 years for the railroad, made many lifelong friends, who always called him “Lolli Pop”. This nickname he got as he was always purchasing lollipops for his daughters while he was away on trips and he wanted to return with a special gift for his kids. In addition to the lollipops, he would bring his son Boston Baked Beans. Cecil was great provider for his family. On January 11, 1997, he retired to enjoy the rest of his life with his wife and family. In his free time, he loved working in his yard, fishing, and riding his gator while he checked on his farm animals on his land. He liked to listen to country music. Cecil enjoyed spending time with his children, grandchildren and great grandchildren. He loved the Lord and was a member of New Hope Baptist Church who was truly humble, caring and loving. Cecil had many friends, some of the closest were the folks who liked to socialize with at Hardees, including Thomas and Becky King. He liked to frequent auctions and find great bargains. During his lifetime, he was blessed with a large loving family, a lot of wonderful friends, and many great experiences in life. His family and friends will miss him deeply yet they know he is healed. Left behind to treasure his memories are his wife, Mae, Amory; daughters, Janice Langford (Gerald), Wanda Wilson Thompson, Amory, Karen Wilson, Amory; sons, Shane Wilson (Serena), Mantachie; eight grandchildren, Bridgett Finn (Chris), Corey Langford (Stacey), Peri Thompson, Jacob Tibbetts, Jonathan Wilson, Samantha Hall (Josh), Shanna Wagster (Drew), Stephanie Cook (Seth), Shayla Wilson; great grandchildren, Mitchell Andrew Finn, Mallory Claire Finn, Madison Kate Langford, Karston Runge, Madalyn Runge, Jeremiah Runge, Emilynn Tibbetts, Brooklyn Davis, Charli Hall, Khloe Hall, Bristol Wagster, and Asher Cook; sister, Gwen Reed (David), Leeds, Al; several nieces and nephews; special friends, Thomas King (Becky), The Railroad Crew, and The Hardees Morning Breakfast Crew. He was preceded in death by his father, Early Wilson; mother, Maerene Bearden; step father, Charlie Bearden; sister, Flossie Berry (Wallace); great granddaughter, Zoey Hall. A graveside funeral service will be held on Saturday, February 6, 2021, at 2:00 pm at Haughton Memorial Park in Amory, MS with Brother Wes Stephens officiating. Pallbearers will be Drew Wagster, Josh Hall, Seth Cook, Mitch Finn, Jacob Tibbetts, Jonathan Wilson, Chris Finn, and Corey Langford. Visitation will be on Saturday, from 1:00 pm to 2:00 pm, February 6, 2021 at E. E. Pickle Funeral Home in Amory, MS. Donations can be made to St. Jude Children’s Hospital, 501 St. Jude Drive, Memphis, TN. Memories and condolences may be shared with his family at EEPickleFuneralHome.com.

The family of Cecil Dean Wilson created this Life Tributes page to make it easy to share your memories.

Send flowers to the Wilson family.