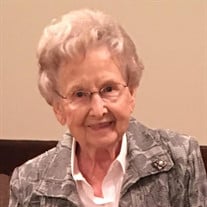 Carolyn Schumpert Kirkpatrick passed away on Tuesday, December 12, 2017 in Amory. She was the daughter of the late William Bailey and Jean Caldwell Schumpert and was born on May 9, 1922 in Amory. Carolyn attended Amory Schools and graduated with the class of 1939. On September 11, 1942, she married Wallace Richard Kirkpatrick. Together, they had 2 children. He passed away on June 1, 2002. Carolyn and her family attended Greenbrier United Methodist Church in Becker. She was a faithful member for over 75 years and at her passing, she was the oldest current member of the church. She was very social and never missed an opportunity to spend time with her friends and family. The ladies of the church would get together, often at Carolyn’s home, and play Mexican Dominoes. God gave her the gifts of cooking, sewing, gardening and baking. She also loved to follow her family ancestors and her research led back to the Revolutionary War. She was a wonderful seamstress. In fact, she and her daughter won a fashion show with her clothes that she designed and made. Reading was also a passion of hers. Her hobbies led her to become a member of the Amory Flower Lover’s Garden Club and a member of the Cotton Gin Port Chapter of DAR. Her career began as a bookkeeper for several Monroe County businesses. She worked for Mississippi Valley Gas Company for several years. She retired from Security Bank after 30 years of service. One thing that she was proudest of was the right to vote. In all of her years, she never missed the opportunity to go to the polls and vote. Carolyn was graceful and charming in everything she did. She was a true Southern Lady who will be missed by her loving family, her church family, and all her friends. Mrs. Kirkpatrick is survived by a daughter, Judy Kirkpatrick Locke (Don), Clinton; son, Billy Kirkpatrick (Mary Jo), Becker; grandchildren, Mark Locke, Laura Crowder, Paul Kirkpatrick and Mary Kathryn Williamson; and great grandchildren, Grace, Meredith and Cannon Crowder, Adele Kirkpatrick, Jack and Mary Neely Williamson; and a host of nieces and nephews. In addition to her parents and husband she was preceded in death by a brother, George Schumpert. A celebration of life service for Carolyn Kirkpatrick will be at 11:00 AM on Friday, December 15 at E.E. Pickle Funeral Home in Amory. Bro. Sammy Washburn will be officiating. Burial will follow in Greenbrier Cemetery. Pallbearers will be Jim and Wes Kirkpatrick, Mark Locke, David and Johnny King, Frank Peeler, Ken Hurtzler and Bobby Hudson. Honorary pallbearers will be Richard King, Hobdy Bryan, and Henry Brevard. Visitation for Mrs. Kirkpatrick will be on Thursday evening from 5:00 – 8:00 PM at the funeral home. In lieu of flowers, memorials may be sent to Greenbrier United Methodist Church. Memories and condolences can be shared with her family at EEPickleFuneralHome.com

Carolyn Schumpert Kirkpatrick passed away on Tuesday, December 12, 2017 in Amory. She was the daughter of the late William Bailey and Jean Caldwell Schumpert and was born on May 9, 1922 in Amory. Carolyn attended Amory Schools and graduated... View Obituary & Service Information

The family of Carolyn Schumpert Kirkpatrick created this Life Tributes page to make it easy to share your memories.

Send flowers to the Kirkpatrick family.