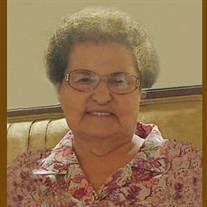 Carlean Wallace Butler of Amory, MS was born on June 22, 1930 in Iron City, TN. She was a daughter of the Late Lee V. and Annie Jossie Cody Wallace. Mrs. Butler departed this life on Sunday, July 1, 2018 at Diversicare in Amory, MS at... View Obituary & Service Information

The family of Carlean Butler created this Life Tributes page to make it easy to share your memories.

Send flowers to the Butler family.