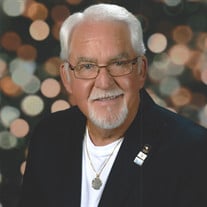 PENSACOLA,FL – Jimmy Dale Taylor, 73, died unexpectedly November 25, 2018, at his home. He was born January 11, 1945, in Amory, MS, the son of G.W. (Dick) and Mildred (Lyle) Taylor. Jimmy graduated from Amory High School, Class of 1963. After graduation he enlisted in the MS Army National Guard and retired from the Guard in 1995 as a MS Brigadier General with 33 years of service. He was married to Beth (Boyd) Taylor and they celebrated 27 years of marriage on October 5, 2018. Jimmy‘s last assignment in the National Guard was as Brigade Commander of the 155th Separate Armored Brigade located in Tupelo, MS. He began his work career at Walker Manufacturing in Aberdeen, MS. He held several positions during his 25 years there, including a period of time as personnel manager. After retiring from Walker he became a partner in Tupelo Tool & Die in Tupelo, MS. After retiring from there, he served as Mayor in his adopted home town of Nettleton, MS. from 2013 to 2015. Finally retiring with his wife to Pensacola, FL . Jimmy was an avid sportsman and enjoyed hunting with his son and friends. He was also an animal lover, along with his wife, raised horses for 15 years on their farm in Nettleton. He loved classic cars and enjoyed participating in the local club, No. MS. Cruisers. After moving to Pensacola, he joined the Grand Lagoon Yacht club where he served as Commodore in 2018. He was a devout Christian and was active in his church, CrossPointe Fellowship where he served faithfully. In addition to his parents, he was predeceased by a brother, Bobby; a sister, Wanda; a brother, Johnny. Surviving in addition to his wife, Beth (Boyd) Taylor are his son, Jimmy Dale Taylor, II (Renee’), Corvallis, OR; daughters, Melissa Griffith (Mark), Pontotoc, MS; Emmie Lou McDaniel, Amory, MS; stepdaughter, Jennifer Benz, Tampa, FL; stepson, Scott Traynom, Pensacola, FL.; nine grandchildren, Jackson Benz, Grayson Griffith, Jade Taylor, Molly Benz, Jordon Taylor, Maclaine Griffith, William Benz, Camryn Traynom, and Jac McDaniel; one brother, Billy Wayne Taylor (Rose); many nieces and nephews. A Celebration of Life will be held on December 9, 2018, from 3pm to 5pm at Grand Lagoon Yacht Club 10653 Gulf Beach Hwy., Pensacola. FL 32507. Another Celebration with Military Honors will be held at 2 PM, Sunday, December 16 at CrossPointe Fellowship Church, 265 Metts Rd, Nettleton, MS 38858. Those who wish to remember Jimmy in a special way may make gifts to St. Jude Children’s Research Hospital, POB 1893, Memphis, TN 38101-9950 or to Escambia Co. Animal Shelter, 200 W Fairfield Dr, Pensacola, FL 32501. Memories and condolences may be shared with his family at EEPickleFuneralHome.com.