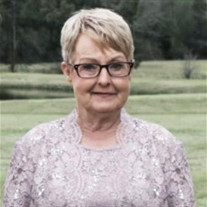 Amory – Bonnie Hall Brown, 65, passed away Monday, December 16, 2019, at North Mississippi Medical Center Gilmore, Amory, MS. Born on January 16, 1954, in Monroe County, MS, she was a daughter of the late James David and Mary Sue Fields Whitlock. Bonnie grew up in Monroe County and graduated from Amory High School in 1972. Bonnie began a long career in nursing and she enjoyed caring for the sick and elderly. Later in life, she furthered her education by obtaining an Associate Degree in Nursing in 1990 from IJC Fulton. She worked at several nursing homes including Magnolia Place Assisted Living Center. She was a member of Grace Fellowship Baptist Church and Bonnie was blessed by God with three children. Her family meant the world to her and her grandchildren gave her great pride and joy when she watched them in sporting events and school programs. She was blessed with three generations of family and anyone would tell you she was one of a kind. In her free time, she enjoyed playing cards and Bingo, she loved being updated on all the current happenings in town. Her favorite music was Country music and one could find her faithfully at her grandchildren’s events. Bonnie leaves behind a legacy of wonderful memories for her family and friends to cherish forever. Her family will miss her dearly. It is with comfort, that her family realizes she is now with her Savior and Lord. Bonnie is survived by her daughter, Nicky Richey; sons, Chad Hall (Whitney) and Roy Lee Brown (Kelsey); grandchildren, Taylor Bennett (Hunter), Gunnar Hall (Kami), Gabby Hall, Miley Hall, Audrey Brown, Chance Brown, Amberlee Brown, Huxley Case Hall; great-grandchildren, Channing Wallace, Alec Hall; sisters, Linda Herndon (Ronnie), Dawn W. Thompson (Chad); brother, Wayne Whitlock (Laura); her nieces and nephews, Kim McDaniel, Karen Stephens, Kathy Collums; Nicholas, Jonathan, and Matt Whitlock; Rena Raines; Roy Brown, father of Roy Lee Brown. She was preceded in death by her parents, David and Sue Whitlock; as well as Ricky Hall, the father of her children, Chad and Nicky. A funeral service will be held at E.E. Pickle Funeral Home at 2 PM, Wednesday, December 18, 2019, with Bro. Danny Burks officiating. Visitation will be on Wednesday, December 18, 2019, from 12-1:50 PM, at the funeral home in Amory.

The family of Bonnie Brown created this Life Tributes page to make it easy to share your memories.