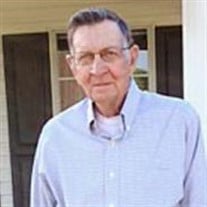 Bobby Cox Amory— Bobby Lynn Cox, 71, went home to glory on Sunday, July 29, 2018, at NMMC in Tupelo. Born on July 31, 1946, in Amory, he was a son of Cladie and Ruth Markham Cox. Bobby graduated Smithville High School with the Class of 1964. Throughout his career, he worked as an auto-mechanic supervisor. Upon graduation, he began his occupation at Scribner Equipment Company. Bobby met his wife, Glenda, in downtown Amory, and they married in 1969. He was married to his loving wife for 49 years. Bobby then worked for Epperson Chevrolet for 24 years before starting at Glenn Farms/Riverbirch Golf Course and working there for 8 more years. Bobby also worked for the City of Amory for nearly 20 years before retiring in December of 2014. For the City of Amory, he was a superintendant for the street department, sanitation department, and City Shop. He served with the Army National Guard for 13 years. Bobby was also a faithful member of Meadowood Baptist Church. Bobby was a hard worker. He believed in a hard day’s work. He was also an honest man, and would always tell his workers that he would never ask them to do anything he wouldn’t do himself. Bobby’s favorite pastimes were watching car races, working on race cars, and building motors and heavy equipment. After test driving a car that Bobby built, Steve McQueen himself highly approved of his workmanship. Bobby also liked to attend the car shows at the annual Railroad Festival. He enjoyed deer hunting, running dogs, and talking on CB radios. In his later years he picked up gardening as a hobby. Most of all, however, Bobby loved watching his grandchildren grow up and teaching them how things worked. He loved going to baseball and basketball games. Bobby was a cancer survivor for 18 and a half years. He was always a fighter, and strong willed. A generous man, he enjoyed talking to everyone and helping others in need. Bobby made many friends along his walk of life, and his impact on Amory will not be forgotten. Bobby leaves behind years of wisdom and love for his family to continue to spread for generations to come. Bobby is survived by his loving wife of 49 years, Glenda Conwill Cox; daughters, Christy Cox Little (Ted), Amory, Melissa Cox Lemonds (Kevin), Smyrna, TN; brother, Larry Cox (Lesia), Sulligent, AL; sister, Jane Cantrell (R.W.), Amory; grandchildren, Sgt. Austin Pearson, U.S. Army (Bri), Colorado Springs, CO, Cole Thompson, Smyrna, TN, Logan Little, Amory, Ellie Thompson, Smyrna, TN; nieces and nephews, Matthew Cox (Erin), Baltimore, MD, Bryan Cox (Sarah), Caledonia, Stephen Cantrell (Jen), Mooreville, Vicki Hendrik, John Noe, Smithville; great nieces and nephews, Eden Cox, Finley and Lottie Cantrell, Anna, Kohen, and John Michael Hendrik; and aunt, Gwen Webster (Johnnie), Jacksonville, FL, brother-in-law, Harold Conwill, Jr. In addition to his parents, Bobby was preceded in death by his father and mother-in-law, Harold Conwill, Sr. and Dora Lee Conwill. A funeral service will be held at 2 PM Thursday, August 2, 2018, at Meadowood Baptist Church. Dr. Lloyd Sweatt and Thomas Griffith will be leading the service. Burial will follow in New Masonic Cemetery. Pallbearers will include Tommy Minich, Mike Tate, Bill Abney, Vernon Watson, Bill Caldwell, Ralph Dill, Greg Beason, and Benny Wright. Honorary pallbearers will be Lee Brasfield, James Burrow, Jason Gallop, Scott Flurry, Keith Flurry, and John Harlow. Visitation will be from 5-8 PM Wednesday, August 1, at E.E. Pickle Funeral Home in Amory. Memorials and donations may be made to Meadowood Baptist Church, 1512 Hatley Rd, Amory, MS 38821. Memories and condolences may be shared with the family at eepicklefuneralhome.com

The family of Bobby Cox created this Life Tributes page to make it easy to share your memories.