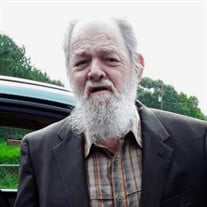 Billy Ray Neese, Sr. Buxton, KS/Becker, MS - Billy Ray Neese, our father, was born on October 31, 1947 to Gilbert and Dorothy Hughes Neese in Fredonia, KS. He grew up on his family farm near Buxton, KS with his 3 brothers and 1 sister. He passed away on April 10, 2021. He loved the outdoors; hauling hay, cutting firewood, shearing sheep and building fence. He served in the United States Army as a young man and was a veteran of the Vietnam Conflict. He met our mother, Sandra Sueann Washabaugh, when they were both young. They were married on her 18th birthday, August 16, 1966. To this union, was born 5 children. He lost his partner, our mother, in a tragic accident when the family was quite young on August 27, 1976. On July 13, 1978 he married Sheila Morris Parks to be a helpmate and a mother to his 5 children that he was endeavoring to raise. To this union, 5 more children were born. In 1982, the family moved to Muddy Pond area in Monterey, TN. We, as children, have a lot of good memories when Dad worked at the Boy’s Camp. We moved back to the Fredonia, KS area in 1989. As life moved on and dad suffered disappointments in life, he later moved to the Amory MS area. There he worked for a dairy farmer for several years. During his later years, he was cared for by his daughter Mary Neese and grandson Zekimo Wayne. His passing is mourned by his children including his sons, Billy Ray Jr. &wife Pollyanna, Amory, MS, Victor Eugene & wife Lori, Norwood MO, Travis Paul & wife Jessica, Pitkin, LA, Morris Gilbert & wife Jessie, Kings, NC, Brett Ryan & Emmett Glenn Park both from Fredonia, KS; and daughters, Kristie Jo & husband Franklin Blosser, Colcord, OK, Mary Louise Neese & Michael Stegall, Amory, MS, Allie May & husband Charles Hughes, Norwood, MO, Amber Raenea & husband Eric Dove, Louin, MS; his mother & Stepmother, Sheila Morris, Fredonia, KS; many wonderful grandchildren and great grandchildren; two brothers, Marvin Neese and wife Glennis, Joe Neese; many nieces and nephews and cousins. He was preceded in death by his wife, Sandra Sueann; one brother; one sister; both parents; an infant daughter; and several grandsons. His funeral service will be held on Friday, April 16, 2021 at 3:30 pm at E. E. Pickle Funeral Home in Amory. Burial will follow in Wren Cemetery. Visitation for family and friends will be held at the funeral home on Friday from 2:00 pm until the service hour at the funeral home in Amory. Memories and condolences may be shared with his family at EEPickleFuneralHome.com

Billy Ray Neese, Sr. Buxton, KS/Becker, MS - Billy Ray Neese, our father, was born on October 31, 1947 to Gilbert and Dorothy Hughes Neese in Fredonia, KS. He grew up on his family farm near Buxton, KS with his 3 brothers and 1 sister.... View Obituary & Service Information

The family of Billy Ray Neese Sr created this Life Tributes page to make it easy to share your memories.

Send flowers to the Neese family.