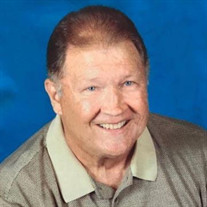 William Giles “Bill” or “Billy” Tibbett, Jr. Amory – Bill Tibbett, Jr., 78, went to be with his Savior on February 7, 2021 at Oak Tree Nursing Center, Amory, MS. Born on June 16, 1942, in Tupelo, MS, he was a son of the late Williams Giles “Bo” Tibbett, Sr., and Birdie Fay Hester Tibbett. Bill grew up with two brothers and was large in stature, so naturally at a young age he began playing football. He attended school in Amory and graduated with the Class of 1960. After being named all-state his senior season at Amory High School, in 1960 Bill continued his stellar football career for the late Dudley Miller at IJC. In fact, in 1961 after his sophomore campaign, the offensive guard/linebacker/nose guard was named not only All-State but All-American. He was quick to point out he probably earned his All-American status in one game during 1961 when he was involved in 37 of the 54 tackles that night against East Mississippi, including 17 solo tackles. Tibbett was invited to play in the prestigious East-West National JUCO All-Star game in Albuquerque, New Mexico. He then reached another of his goals, to play Division 1 football on the NCAA level when he transferred to Hardin-Simmons. He continued to receive honors at the four-year school including a big game against the nationally-ranked Arkansas Razorbacks in which he was named team captain. In 2009, Bill was inducted into The IJC Athletic Hall of Fame. After graduation, he started his career doing what he knew best, he became a coach and a math teacher. He first coached football, wrestling, and track, at Rule High School in Rule, Texas. From there, he moved to Guntersville, Alabama where he coached football for several years. Then a move to Starkville enabled him to work while he obtained a Master’s Degree at MSU. While in Starkville, he worked for many years at Fidelity Union Life Insurance Company. Finally, he returned home to Amory where he served the public at the United States Post Office. Bill was a member of the National Rural Letter Carriers Association. He was loved by his coworkers and made many memories through the 30 years he worked with them until he retired in 2004. During his entire career, he was so supportive of others and students. Bill always encouraged everyone to give 100% as well as do their very best in school and life. He bled black and gold for the Amory Panthers and for several years he was proud to be on the football chain crew. He was also very supportive of Coach Roger Duke and the Amory Girls’ Softball program as he kept the scorebook and helped coach for years. He was blessed during his lifetime with a loving wife, Sandy, wonderful children and grandchildren whom he loved dearly. He loved God and was a member of First United Methodist Church. He had a servant heart, was caring and loving, a real people-person who always wanted everyone to be happy. Sandy and he loved to travel together, attend old car shows as well as different sports. He liked to restore old cars and he appreciated their history. He enjoyed Elvis Presley, old Country and Gospel Music. Bill was a great dancer who liked to live life to the fullest and his family was blessed with such a caring man. Above all else, he enjoyed spending time with his family. He was a great caring father, loving husband, priceless grandfather, and a good friend to many. Although his presence will be greatly missed, his family knows that he is now healed. All the great memories made through the years will be treasured forever. He leaves behind, to carry on his legacy, his wife, Sandra “Sandy” Tibbett, Amory, MS; daughters, Dr. Manda Joy Burnett (Evan), West Monroe, LA, Deanna Leigh Sanders (Paul), Amory; mother of his children, Bobbie Tibbett, Amory; step-daughter, Donna Coleman Carter, Brandon, MS; step-son, Dr. Jason Coleman (Cynthia), Hernando, MS; grandchildren, Halle Joy Sanders; Rhys Walker Burnett; Max Martin Sanders; Chloe Jolie Burnett; step-grandchildren, Griffin and Garrett Coleman; sister-in-law, Gin Tibbett, Starkville, MS; niece, Ginger Tibbett; numerous special friends and coworkers. He was preceded in death by his parents, Williams Giles “Bo” Tibbett, Sr. and Birdie Fay Hester Tibbett; brothers, Jimmy Tibbett and Johnny Tibbett. A funeral service will be held at 2:00 pm on Wednesday, February 10, 2021, at Amory First United Methodist Church with Rev. Wesley Pepper and Rev. Don McCain officiating. Burial will follow in Amory Historical Society Cemetery with Pallbearers being Pete Patterson, Steve Ponder, David Millender, Don Barnes, and Bill Lyles. Honorary Pallbearers will be Rutt and Angela Williams; Gary Harper; Mabry Allison; David Thompson; Jerry and Linda Cantrell; Danny and Betty Brewer; Steve and Leigh Anne Strawbridge; Leland Strawbridge; the Amory High School Class of 1960; the Upper Room Sunday School Class; and the employees of the Amory Post Office. Visitation for family and friends will be held at First United Methodist Church on Wednesday, February 10, 2021 from 1pm until the service hour. The family would like to extend a heartfelt thank you to Oak Tree Nursing Center staff and Kindred Hospice Staff for their special care and love they showed Bill. Donations in lieu of flowers may be made to First United Methodist Church, 107 3rd Street South, Amory, MS 38821, or the Alzheimer’s Association, PO Box 96011, Washington, DC 20090-6011. Memories and condolences may be shared with his family at EEPickleFuneralHome.com

The family of Billy or Bill Tibbett, Jr. created this Life Tributes page to make it easy to share your memories.