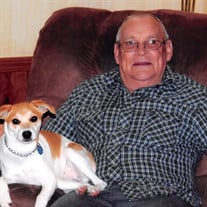 Mooreville — William “Bill” Arvell Childers, 75, passed away on Saturday, March 10, 2018 at his residence in Mooreville. Born in Wren on March 14, 1942, he was the son of Joseph Arvell Childers and Nora Lee Welch Childers. Bill attended school in Amory. He married the love of his life, Betty, on August 10, 1962. They were happily married for 55 years and were blessed with two children. A man who could fix just about anything, Bill worked as a Mechanic for Preferred Truck Leasing out of Cleveland, TN. A true outdoorsman, Bill loved to crappie fish, go boating, and camping in the woods. He enjoyed life to the fullest and enjoyed cooking meals for family and friends. Bill especially liked to feed and watch Martins and Ducks. He listened to country music and you could count on him teasing folks whenever the opportunity presented itself. Besides his family, some of his best friends were his dogs “Squirt” and “Toot”. Bill will be dearly missed by all who knew him and he left behind wonderful memories for his family to treasure forever. Bill is survived by his wife, Betty Childers, Mooreville; daughter, Debbie Law, Mooreville; son, Andy Childers, Wren; grandchildren, Chad Childers, Jason Childers, and Adam Childers; great-grandchildren, Bailey Childers plus many other great-grandchildren; sister, Shirley Price, Amory; brother, Lee Childers, Wren; Sister-in-law, Charlotte Ledbetter Ownby (James), Alberqurque, NM; brother-in-law, Thomas Ledbetter, Vernon, AL; a host of nieces and nephews. In addition to his parents, Bill was preceded in death by his sister, Laura Childers Easter and his brother, James Childers. A Memorial Service will be held on Tuesday, March 13, 2018, at 2:00 pm at E. E. Pickle Funeral Home in Amory. Visitation will be on Tuesday, March 13, 2018, from 1:00 pm until 1:50 pm at the funeral home. Memories and condolences may be shared with the family at eepicklefuneralhome.com

The family of Bill Arvell Childers created this Life Tributes page to make it easy to share your memories.

Send flowers to the Childers family.