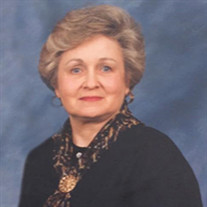 Amory—Bettye Richey Morris Benedict, 85, passed away at Oak Tree Manor Assisted Living on Monday, January 13, 2020. Born in New Albany, MS on May 11, 1934, she was a daughter of the late Roy Thomas Richey Sr and Jewell Prewett Richey. Bettye attended New Albany schools where she was a Majorette in the Band for four years, on the Student Council, as well as many other clubs. She was voted Most Beautiful, Miss Union County, and Miss New Albany during school. She graduated from High School in 1952. She was a member of First Baptist Church in Amory, MS. She worked as a secretary at AHS for several years. She owned and operated the Front Porch Gift Shop for ten years. She also worked at the Amory Regional Museum for several years prior to her declining health. Bettye married M.H. “Nob” Morris and they had two daughters, Debbie and Lesli. Nob operated Morris Metals Corp. scrap metal business in Amory from 1957 until his death in 1991. The whole family enjoyed traveling together to places like Gatlinburg, Pickwick Lake, and attending MSU football games. Later in life, she married George Edward Benedict, and they were married over 22 years. George had retired from Frisco Railroad and they made lots of memories over the years. The two of them owned a motorhome and they loved to travel, taking their grandsons, Luke and Mark many times. Bettye had a very outgoing personality and enjoyed playing in Bridge Clubs, board games, and spending time with her family and friends. She made many memories over the years with her fellow bridge club members. Although Bettye will be dearly missed by all who knew her, the memories she shared with her friends and family will live on forever. Bettye is survived by her daughter, Debbie Morris, Amory; sister, Jane Richey Cousar, Ripley; daughter-in-law, Sherry Benedict Jones; son-in-law, Thomas Foxworth Wolford lll, Starkville; grandchildren, Smith Wolford, Starkville, Luke Benedict (Emily), Oxford and Mark Benedict (Alyssa), Amory; several great-grandchildren: Anna Lauren Benedict, Finley Olivia Benedict, Edward August Benedict, Peyton Finley Benedict, Brady Edward Benedict, Nolan Guy Benedict, Maddux Joseph Benedict; many nieces and nephews whom she loved very much. In addition to her parents, she was preceded in death by her first husband, M.H. “Nob” Morris; second husband, George Benedict; daughter, Lesli Morris Wolford; step-son, Joe Benedict; grandchildren, Thomas Foxworth Wolford, IV and Robert Price Wolford; and brother, Roy Thomas Richey Jr. The family would like to express their appreciation to Teresa and her staff at Oak Tree Manor, Amory, MS for their great care over the years. They would also like to thank Southern Hospice and their staff who loved and cared for her. A very special heart-felt thanks is given to Phil and Susan Morris. There are no funeral services planned at this time. Memories and condolences may be shared with her family at EEPickleFuneralHome.com.

The family of Bettye Morris Benedict created this Life Tributes page to make it easy to share your memories.

Send flowers to the Benedict family.