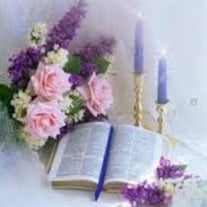 Bettie Silas Pierce, age 83, of Fulton, Mississippi, formerly of Kenosha, Wisconsin passed away July 30, 2020 under the care of Kindred Hospice and the caring staff at Charleston Place Assisted Living in Fulton, Mississippi with two of her nephews at her side. She was born September 6, 1936 in Turon, Mississippi, daughter of Hamp Cleveland and Maude Elliott Silas. Bettie attended Turon Consolidated Schools. She married Homer Pierce March 23 1963 and they were married for 40 years. He predeceased Bettie when he passed away November 26, 2002 in Kenosha, Wisconsin. Bettie was a very generous person and always made friends easily. She retired from American Motors in Kenosha and made Wisconsin her home for many years. She moved back to Mississippi a couple of years ago where she again became reacquainted with old friends and made many new ones. She is survived by her sister Barbara Silas Leech (Boosy) of Smithville, Mississippi; nephews Jack E. Beach Jr. (Margaret) of Tecumseh, Michigan; Jeffery Silas of New Ellenton, South Carolina; Mike Leech (Barbara) of Franklin, Tennessee; Eddie Leech (Gidget) of Fulton, Mississippi; nieces Doris Funari of Texas; Deoloris Frigon of Arizona; Vernay Mary Langley of Nettleton, Mississippi, and many great nieces and nephews. She was preceded in death by her parents; sisters, Bessie Pierce (Leamon), Ruby Beach (Jack Sr), and brother, Hamp C. Silas, Jr. (Mary) as well as her husband. Condolences may be sent to the family at the Pickle Funeral Home in Smithville or Amory Mississippi. A memorial service will be planned for a later date and burial will be at Turon Cemetery in Itawamba County, Mississippi.

Bettie Silas Pierce, age 83, of Fulton, Mississippi, formerly of Kenosha, Wisconsin passed away July 30, 2020 under the care of Kindred Hospice and the caring staff at Charleston Place Assisted Living in Fulton, Mississippi with two of her nephews... View Obituary & Service Information

The family of Bettie Jean Pierce created this Life Tributes page to make it easy to share your memories.