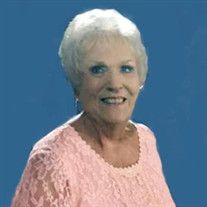 Barbara Cowley Smithville – Barbara Cowley, 77, began her new life in heaven on Tuesday, January 26, 2021. Born on November 26, 1943 in Itawamba County, MS, she was a daughter of the late George W. and Wilma Canup Snow. Barbara attended school in Tremont as well as Smithville, where she graduated from High School in 1961. It was on her High School senior trip, in the fall of 1960, where she met her best friend and love of her life, Earl Wayne Cowley. They were inseparable and were married on October 20, 1961. They were blessed by God with a daughter as well as a granddaughter and many extended family members. She lived for the Lord and was happy to serve others. Barbara was an active member of Smithville Baptist Church for over 60 years. She loved her church family and through the years she taught GA’s and she served on their building committee. During her lifetime, she worked at many places, making many friends through the years. Barbara worked initially at People’s Drug Store, then became an underwriter for MS Funeral Insurance Company. Later in life, she worked at Black’s Department Store as a Secretary, at a Furniture Store in Fulton, and lastly she worked part time in book keeping with Hilda Johnson. Her favorite job of all was taking care of her family and spoiling her grandchild. In her free time, Barbara loved traveling, especially with her best friend, her husband. They liked staying in the mountains of East Tennessee and just enjoying the peacefulness of the area. They went to see both Elvis and Collin Raye in concert and her husband said she seemed to love them, as much as he. Barbara made time to watch NBA Basketball, she loved the Lakers and she met Magic Johnson in person. Often, she would dive into the daily drama of the T.V. soaps, with Days of Our Lives getting her full attention. With so many friends, Barbara was always chatting with someone catching up on the phone or meeting for a meal. She always wore a smile, was funny, and never met a stranger. Her presence will be dearly missed by her soulmate, family and friends yet they know that she is no longer in pain and she is healed. The memories made over all these years will live on in her loved ones’ hearts. Left behind to cherish her memories are her husband, Earl Wayne, Smithville; daughter, Dawn Garrett, Philadelphia; grandchild, Cowley Garrett; sister, Joice Snow, Chehalis, WA; brother, Johnny Snow (Teresa), Amory; sisters-in-law, Gay Nell Snow, Fulton, Joyce Snow, Tupelo; several nieces and nephews and many special friends. In addition to her parents, she was preceded in death by her sisters, Jean Strange, Jo Helen Lindley; brothers, Rex Snow, Jerry Snow and Wayne Snow. A funeral service celebrating Barbara’s life will be held on Friday, January 29, 2021 at 2:00 pm at Smithville Baptist Church, Smithville with Bro. Wes White officiating. Burial will follow in Young Memorial Garden with Pallbearers being John Snow, Roger Snow, David Snow, Jamie Long, Allen McCollum, Ricky McCollum, Jay Cowley, Michael Snow, Austin Spann, and Scott Lindley. Visitation for family and friends will be held at the church on Friday, January 29, 2021, from 12:30 pm until 1:45 pm. Donations in lieu of flowers may be made to Smithville Baptist Church, 63388 Highway 25 North, Smithville, MS 38870 or to St. Jude Childrens’ Research Hospital, 501 St. Jude Place, Memphis, TN. Memories and condolences may be shared with her family at EEPickleFuneralHome.com

The family of Barbara A. Cowley created this Life Tributes page to make it easy to share your memories.

Send flowers to the Cowley family.