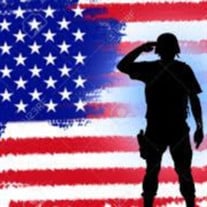 Aberdeen – Alvin Glenn, 85, passed away on Thursday, May 7, 2020, at Diversicare Nursing Center, Amory, MS. Born on June 21, 1934, in Wren, Mississippi, he was a son of the late Robert Dannie Glenn and Obie Ethel Wilson Glenn. Alvin grew up in Monroe County, MS and graduated from Wren High School. A patriotic man, he enlisted in the United States Army in August 1955 and served as a Specialist 4th Class. After several years of service, he went to work for the FBI in Washington, D.C. A hard working gentleman, he later became an entrepreneur and owned and operated his own trucking company until his retirement. His hard work and determination enabled him to have a successful business of which he was proud. Alvin was a member of the VFW and the American Legion. He was always willing to help others and he would give someone the shirt off his back if they needed it. He attended Central Grove Baptist Church and he believed in Christ. He showed his faith through his works and giving attitude. He was passionate about fellow man and he despised war. In his free time, he liked to listen to country music and simply visit with friends and family. He will be dearly missed by all that knew and loved him. Survivors include his nephew, Dr. Randy Lynn Nicholson (Debbie), Wren. He was preceded in death by his parents, Robert Dannie and Obie Ethel Wilson Glenn; brother, Robert D. Glenn, Jr.; sister, Lois Glenn Nicholson; twin brother who passed at birth, Alvis Glenn; nephew, Ronnie Nicholson; brother-in-law, E. G. Nicholson. A private family graveside funeral service will be held on Saturday, May 9, 2020, at Haughton Memorial Park in Amory, MS with Bro. Dennis Smithey officiating. Burial will follow in the cemetery. Memorials may be made in the form of donations to the Central Grove Baptist Church, 30298 Central Grove Road, Aberdeen, MS, 39730 or St. Jude Children’s Research Hospital, 501 St. Jude Place, Memphis, TN. Memories and condolences may be shared with his family at epicklefuneralhome.com.

Aberdeen &#8211; Alvin Glenn, 85, passed away on Thursday, May 7, 2020, at Diversicare Nursing Center, Amory, MS. Born on June 21, 1934, in Wren, Mississippi, he was a son of the late Robert Dannie Glenn and Obie Ethel Wilson Glenn. Alvin... View Obituary & Service Information

The family of Alvin Glenn created this Life Tributes page to make it easy to share your memories.

Send flowers to the Glenn family.