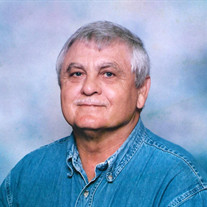 Nettleton— Allen Junier Walls, 74, passed away on Saturday, December 1, 2018 at his residence. He was born in Slate Springs on July 5, 1944 to Duell Walls and Mary Burleson. A loyal and faithful servant of God, Allen was a member of Professors of Jesus’ Name Church. He loved God and witnessed to everyone he met. His faith guided his life from a young age, and even as a child, Allen would talk to God all of the time. His hope was that everyone he witnessed to, especially his children, would join him in the everlasting light of heaven one day. He had a loving heart for everyone he met, and was quick to serve in any way that he could. During his career, Allen worked for Kelwood in Calhoun City, Reed’s in Nettleton, and Eljer in Verona. Additionally, he worked with several farms and with Jack Ridings. He retired from Metaloy at the age of 53. A few of his friends at work included Dave McGee from Metaloy, the past employees of Metaloy, and countless others. Allen was also a member of the Nettleton Masonic Lodge. Allen appreciated coffee and good conversation, paired even better together. In his free time, he liked “wheelin’ and dealin’” at the flea market and finding good bargains. Allen also enjoyed listening to Gospel music. A few of his closest friends were Durell Hall, Sue Cox, Bro. Eddie, and Sister Tina. A God-fearing, loving father, his greatest treasures were his children and family. Allen was an old-fashioned, honest man who will be missed by those who had the pleasure of knowing him. Allen is surely rejoicing in his new heavenly home. Allen is survived by his daughter, Selena Weaver (Paul), Nettleton; sons, Jerome Walls (Angel), Nettleton, Anthony Rex Walls (Dana), Houlka, Ronald Dale Walls (Karen), Amory; grandchildren, Nikki Wright (Dane), Colby Rooker (Micah), Jana Walls, Harley Walls, Cory Walls, Emily Wright (Chanler), Ryan Walls, Tristin Weaver (Diana), Caleb Weaver; great-grandchildren, Khylur Gray, Jaxon Wright, Elizabeth Rooker; nieces, Melesa Walls, Angela Walls; and special friend, Sue Cox. In addition to his parents, he was preceded in death by his brother, Alfred Walls; and wives, Emma Lea Carter Walls and Wilma Ray Flanagan Lee Walls. Funeral Services for Allen Walls will be held at 1 P.M. on Wednesday, December 5, 2018 at E.E. Pickle Funeral Home, with Bro. Eddie Clayton and Bro. Samuel John Raper officiating. Burial will follow at Pine Grove Cemetery in Nettleton. Pallbearers will include Ryan Walls, Tristan Weaver, Caleb Weaver, Timothy and Nathan Clayton, and Dane Wright. Honorary pallbearers will be Jeffrey Sullivan, Hunter Holley, Chanler Wright, and Micah Rooker. Visitation will be from 5-8 P.M. Tuesday, December 4, at the funeral home. In lieu of flowers, donations may be made to the Nettleton Food Pantry, P.O. Box 134, Nettleton, MS 38858 Please share memories and condolences with his family at eepicklefuneralhome.com

Nettleton&#8212; Allen Junier Walls, 74, passed away on Saturday, December 1, 2018 at his residence. He was born in Slate Springs on July 5, 1944 to Duell Walls and Mary Burleson. A loyal and faithful servant of God, Allen was a member of Professors... View Obituary & Service Information

The family of Allen Junier Walls created this Life Tributes page to make it easy to share your memories.

Send flowers to the Walls family.