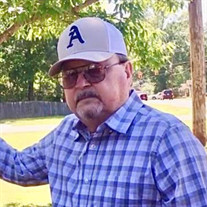 Alan Clay Amory – Maurice Alan Clay, 83, finished enjoying God’s creation here on earth and began his new life in Heaven on March 17, 2022. He was born on April 15, 1938, in Pontotoc, MS to the late Calvin Maurice and Leona Hale Clay. Alan grew up in Northern Mississippi and graduated from Smithville High School. A young man not afraid of hard work, he went to work early and was not afraid to get dirty. As a child he and his sisters played in the Bentonite mines where their father ran the mines. Eventually Alan, as well as his other family members, worked in the Bentonite Mines in Smithville. Alan also proudly served in the Mississippi Army National Guard for seven years and was never one to take credit, as he always honored those who fought during wartimes. Later in life, he went to work at Kerr-McGee Chemical Corporation and made many friends through the years. Alan was glad to be the solid foundation for his children, always being a great role model who was steady and always insistent on doing the right thing. He retired from Ker-McGee in 2000, to continue working, but in a fun way, at his new office, the beloved Clay Farm in Monroe County. This purchase of his legacy property was something he had longed to do his whole life, and he was so glad he realized his dream. He loved God and was grateful for all the blessings given to him, including his children and grandchildren. Alan was a member of First Baptist Church in Amory and enjoyed the fellowship with his church family. He was always doing things for others, had a heart for serving, and he was always truthful even when it was difficult to be. He always had great manners around others, was considerate and caring. Alan had a great sense of humor, was funny, and had no problem making friends. In his down time, he loved to do anything outside, but mostly hunting and fishing. He was a member of the NRA and several hunting and fishing clubs where he made some of his best friends for life. One of his best friends was his four legged buddy, “Buster” whom always accompanied him on the farm. His CB handle, when out on the farm and the club grounds, was “Sachmo”. When he was home, if interrupted, one of his favorite past times was to lead telemarketers on a crazy path they had no idea they were about to take. Always active, he had a little quirk where he liked to pop his thumb while watching tv. He knew how precious life was and he cherished all the great times with his family and friends. Alan was a kind, wise, loving man who laid a great foundation for his family for many generations. He is going to be missed yet his family look forward to the day they are reunited in Heaven. Left behind to treasure his memories are his daughter, Teresa Clay, Amory; son, Mark Alan Clay (Julie), Hatley; grandchildren, Tyler Clay and Clint Alan Clay (fiancé, Samantha Smith); sisters, Verna Coleman (Danny), and Dot Harlow (Jimmy); nieces, Leigh Ann McGonagill and Tracey Riddle; special sister-in-law, Jo Pearson and extended family nieces and nephews. In addition to his parents, he was preceded in death by his nephew, Russ Coleman. A Celebration of Life Service will be held on Wednesday, March 23, 2022, at 4:00 pm, at E. E. Pickle Funeral Home in Amory with Dr. Allen Simpson officiating. Burial will follow at Amory Historical Society Cemetery, Amory, MS with Pallbearers being Tyler Clay, Clint Alan Clay, Danny Hathcock, Eddie Poole, Jimmy Earl, and Wade Horn. Honorary pallbearers will be Byron Shelton and Steve Chism. Visitation for family and friends will be from 2:00 pm until the service hour at the funeral home. The family would like to extend a special heart felt thank you to the staff at Riverplace Nursing Center who cared so deeply for Alan. They thank God for such compassionate people and want them to know they consider them extended family. Donations in lieu of flowers may be made to St. Jude’s Children’s Research Hospital, 501 St. Jude Place, Memphis, TN. Memories and condolences may be shared with his family at EEPickleFuneralHome.com

The family of Alan Clay created this Life Tributes page to make it easy to share your memories.

Send flowers to the Clay family.