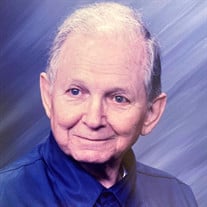 In 1920 the Cleveland Indians won the World Series, Mickey Rooney was a box office star, Dr. Jekyll and Mr. Hyde was a top grossing film and on August 7, Arnold Fredrick Hodges was born in Grenada, Mississippi. He was the only child born to John Newton and Nina Dees Hodges. Fred joined the United States Navy and served in World War II as a Navy medic assigned to the First Marine Division, 3rd Regiment Raider Battalion in the South Pacific. Upon the conclusion of his military service he married Nell Joiner. Together they had two children, Richard and Mark. Nell predeceased Dr. Hodges in 1966. In 1968 Fred married Emma Jean Vaughn Gosa. His family expanded to include Jean’s two children, Jeanette Gosa and Donald Ray Gosa. Dr. Hodges graduated from Southern College of Optometry and opened his practice in Amory where he was a pillar of the community for more than forty years. He was the founding president of the Mississippi Optometric Association 1962-1964 and served on the Mississippi State Board of Optometry from1980-1985. Dr. Hodges’ family includes his son, Richard and his wife Patricia, their daughter, Anna (Craig)Banks and their children, Madison and London; and Richard’s daughters, Kristina (Lee) Battle and their children, Avery and Preston; and Tonya (Wayne) Smith and their children, Mackenzie, Claire, Lydia and Garrett. Mark’s family includes his wife, Peggy and his children, John (Gillian) and their daughter, Roslyn; Michelle (Brandon) Garcia and their daughter, Margot; and Arianna (Xavier) Washington. Jeannette (Ricky) Gilmore have one son, Bradley. Donald Gosa Hodges and his children , Alex Hankins and her children, A’donis and Avion; and Andrew Hankins. His expanded family also included Abby Hankins and James Bookout and his adventurous traveling companion, Mary Jennings. He was a devoted Bible scholar, committed church servant and friend to all. In his 80s he served with the disaster relief organization, Eight Days of Hope. He enjoyed woodworking, music, and model railroads. He served his community through organizations such as the Kiwanis and other civic endeavors. He will be remembered for his kindness, thoughtfulness, and unconditional love for others. Visitation will be held at First United Methodist Church in Amory on Friday from 5:00 until 8:00 p.m. the funeral service will be held on Saturday at 11:00 a.m. at First United Methodist Church in Amory. The graveside service will follow in Kosciusko, Mississippi. Pallbearers will be: Richard Hodges, Mark Hodges, Xavier Washington, Brandon Garcia, Wayne Guin, Joe Malone Honorary pallbearers: John Marvin Pearce, Dr. Richard Hollis, John Hodges, USCG

In 1920 the Cleveland Indians won the World Series, Mickey Rooney was a box office star, Dr. Jekyll and Mr. Hyde was a top grossing film and on August 7, Arnold Fredrick Hodges was born in Grenada, Mississippi. He was the only child born to... View Obituary & Service Information

The family of Dr. A. F. Hodges, O.D. created this Life Tributes page to make it easy to share your memories.

In 1920 the Cleveland Indians won the World Series, Mickey Rooney...