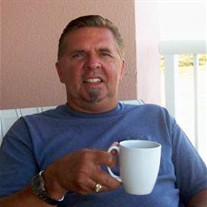 Huntsville — Rex Allen Thompson, 58, passed away on Saturday, November 24, 2018, in Huntsville, Alabama. Born on January 27, 1960, at Gilmore Memorial Hospital in Amory, MS, he was a son of James Rex and June Harlow Thompson. Rex graduated from Amory High School with the Class of 1979. He joined the U.S. Army National Guard in January of 1979. In October of 1979, he finished his 6 month training for the Military Police. He was then discharged and joined the US Army. Rex had an interesting career during his twenty four years of service to our country. Some of his duties included being Military Police, a Drill Sargent, a teacher at the Army Cadet Academy in New York, a finally a 1st SGT. before retiring. In March of 2004, he was discharged. He then spent one year working at Kwajalein Island and then he returned home where he made his home in Huntsville. Rex was blessed during his lifetime with two children whom he loved very much. He was a proud American and his sacrifice for our Country will always be cherished. He will be missed greatly by his family and friends. Rex is survived by his daughter, Sheena McGaugh (Bobby), Elizabethtown, Kentucky; son, Chris Thompson, Los Angeles, CA; his mother, June Thompson, Wren; brothers, Freddie Thompson, Wren; Teddie Thompson(Glenda), Amory; Eddie Thompson, Huntsville; four grandchildren, Holden & Hayden McGaugh; Kai and Rooni Thompson; a host of nieces, nephews, and cousins; very special friends and caregivers, Susie and Mike Bryant, Huntsville. He was preceded in death by his father, James Rex Thompson; grandparents, Mr. & Mrs. Hamp Thompson and Mr. & Mrs. Richard Harlow. A Memorial Service for Rex will be held at 11:30 AM, Saturday, December 8 at E. E. Pickle Funeral Home, Amory, with Bro. Dennis Smithey officiating. Honorary Pallbearers will be Terry Garner, Ricky Chaney, Michael Pearson, Hayden and Holden McGaugh. Visitation will be on Saturday, from 9:30 AM until 11:20 AM at the funeral home in Amory. Please feel free to share memories and condolences with the family at eepicklefuneralhome.com.

The family of 1st SGT Rex Allen Thompson, US Army, RET. created this Life Tributes page to make it easy to share your memories.

Send flowers to the Thompson, US Army, RET. family.